Comex 2011 - An Event of Several Firsts & HardwareZone's Biggest Outreach Yet

Weekend shoppers to Suntec City and Marina Square would definitely have been frustrated with all the overcrowding and jams caused by the third tech show of the year. While we share some of those sentiments, we won't deny that this year's Comex was quite a blast! What? You don't think so? If the HP TouchPad tablet fiasco, excellent bargains including full multimedia notebooks for S$900 or less, the widest range of tablets on sales, free shuttle buses by Dell and the presence of HardwareZone and HWM's PlayTest to educate people aren't enough indicators, you'll need to get a reality check! If you didn't catch all that, or only experienced some of it, let's do a quick recap. The start of Comex 2011 was probably the biggest highlight of the show with huge crowds amassing for HP's defunct but super affordable $126 TouchPad Tablet (16GB). While it seems silly to rush for an EOL product, there's actually no better device anywhere remotely close to that price (even if it were to work only for a year). In fact the crowd's pressure was so intense that Comex had to start off unofficially at 11.30am instead of the customary 12pm. We aren't faulting the people since anyone would want a good deal, but HP's management of the whole situation leaves much to be desired for the sale of just 200 units for the first day. RazorTV was on the spot to catch the mad rush for HP's tablet if you haven't seen the clip yet. Personally I've not seen a rush such as this in any of the past tech shows. What's surprising is that HP isn't new to offering great deals such as its renowned student notebook offers in the past and yet this could have happened. To prevent a repeat of the first morning of Comex, HP has since discontinued direct sales of their TouchPad but left it available as an option for those purchasing selective HP notebooks and desktop systems. For those who totally missed out on the online updates for the TouchPad's status, it's a good thing these notices were in place on-site:- 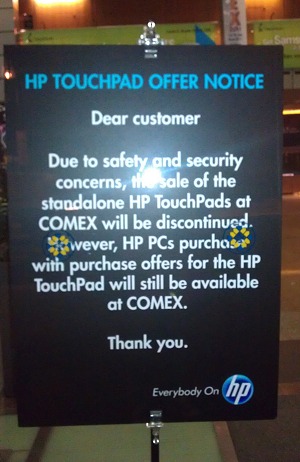 Apart from the HP tablet fiasco, there were plenty of other excellent deals. Canon's printers were going at a good discount and it's not just compared to list prices, but street prices in general. For example, their top business AIO printer, the MX886 is normally sold for S$499 and hardly any less, but in Comex 2011, you get goodies along with a S$100 discount. In the camera department, Olympus cameras were one of the more discussed with its E-PL1 going for just S$498. Granted it's not the newest, but for a 12MP Micro Four Thirds (MFT) camera system, it's a steal. Of course for those on the cutting-edge, the E-P3 and Sony's Nex-C3 are great choices and were offered at better prices too. Tablets choices were aplenty but not many were going at deep discounts (aside from EOL products). However for a newcomer, Huawei's MediaPad tablet had a compelling offer given its size and specs for just a little over S$500.

Notebooks however were the real steals of the show with several vendors offering really good deals in the S$700 to S$900 range where one can get a basic multimedia class notebook. Specs include a 14 or 15-inch screen, basic discrete graphics, HDMI output and not to forget a second generation Core i3 processor or better. Don't scoff just because it's a Core i3 processor, it's plenty powerful enough for most people and definitely for students. You certainly couldn't have gotten such full fledged notebooks at those price points just a show or two ago. We consumers are surely the winners of course and to a great extent, spoilt for choice. Here's some of the other good deals caught on video:-

In addition to good deals, there were a handful of other firsts in terms of debut and pre-orders. For example, the Lenovo U400 notebook landed in Singapore first and its available free from StarHub upon signing up for one of its 100Mbps fiber broadband plan. It will be available in retail from mid October with a listed price of S$1899. Toshiba's Qosmio F750, the world's first glass-less 3D notebook was going on pre-order, while the Toshiba Regza AT100 Android tablet was unveiled in our PlayTest event and was for sale from the third day of the show. There's more to the list, but let's move on.

Dell played an interesting role in this show as they provided a free shuttle service from a few heartland towns (Sengkang, Tampines, Clementi and Woodlands), direct to Comex 2011 and even return trips. That's a kind gesture on their part that should go a long way to securing more fans for the brand who is now synonymous with good after-sales service. Now when was the last time you enjoyed such a service from tech clients in any of the tech shows?

So what about HardwareZone's role in Comex? Of course we whipped out our Comex 2011 Preview article to give you a heads-up well in advance of the star buys from the retailers point of view. What was vastly different is the direction for the actual event coverage. We realized the number of vendors participating in these shows and the offerings available are only going to grow upwards from show to show. In fact, we broke yet another record with over 400 pages of raw IT/CE-related brochures (this is discounting all the other irrelevant brochures). Even after our recent effort in combining all tech show related resources like editorial articles, brochures, special offers from vendors, forum discussion topics and twitter feeds within one portal - The Tech Show Portal - we noted that we can still do more for our dear readers.

Since any one brand can have tens to hundreds of products on offer, to help audience spot good deals from all these resources, we decided to spend time to analyze these offers and provide you exactly what we think were some of the best deals from each vendor. And you can count on us since we've a team of tech writers who are each specialized in dedicated product categories. The result is our Comex 2011 Buying Guide articles which ensure you know what are all the offers from each vendor courtesy of the brochures, where you can find the vendor in the actual show floor and finally, our analysis of the top few products from each vendor and why you should consider it. This approach was chosen since brochures these days have most of the information - product pictures, specs and prices. What you need to know as a consumer is which of these are actually worthy of your consideration. We really hope this Comex coverage has been much more beneficial than ever before to truly empower you. Please let us know of your thoughts.

During the course of the event, we were busy bringing you updates of on-site offers, interesting sights and much more via our constant twitter updates. With an average of a tweet per minute, you can be sure we've plenty to share with you if you were following us. We were also helping to answer as many personal queries as possible to assist our followers to the best of our knowledge. Before long, we broke our next record as we passed the 7,000-mark for the number of Twitter followers and we thank you for your continued support.

Last but not least, HardwareZone and HWM teams were present all four days of the event in our biggest educational effort ever with our very own PlayTest event happening right at Comex! Taking place on the second floor of the Suntec exhibition center, this is perhaps a first for any publication to conduct such a large scale complimentary event to add more value to the show than ever before. As in with any of our PlayTest tech events, we aim to educate, engage and entertain our audience. Instead of it being primarily driven only by the editorial team like in past PlayTest events, we tried something a little different by partnering with some of the biggest industry players like Canon, HTC, Singtel, Samsung and Toshiba to bring you the largest ever PlayTest event. A quick video reel of what took place at PlayTest is available right after the photos:-

Spanning the entire four days from morning till night, we lined up several seminar sessions each day with the aim of educating interested buyers so that they can make an informed buying decision. The editorial team was at hand to provide trends and buying tips while product managers from the partner brands showcased their latest products and services with detailed information on how to use them too. Toshiba even debuted their new Regza TA100 Android tablet at our event. Sounds like a 1-way seminar? Not at all! It was interactive as well with interesting QnA sessions as people tried to understand more from both editorial and the vendors to better equip themselves, while the partner vendors conducted give-aways and even games! That's not all, as partner vendors had plenty more floor space in the second floor to showcase and provide hands-on demos of their products - away from the main halls in fourth and sixth floors where you could hardly hear yourself, let alone walk two steps without having a brochure in your face. You can check out a sample of our PlayTest coverage to get an idea how was it like in a day at PlayTest. In all, thousands of members from the public benefited from PlayTest either via our seminars or via the dedicated booth space to try out products and services for themselves with the product specialists at close-hand.

That about wraps up all the key happenings of Comex 2011, making it perhaps one of the best tech shows ever while HardwareZone achieved yet another milestone in connecting tech to you.