Every year tech companies from around the world flock to CES to showcase their latest technologies, from robot dogs and smart ceiling fans, to toilets that talk to you. But amongst all the innovation, some companies are content with just trying to cash in on the latest fad.

There’s no better example of this than Kodak, a once venerable name in photography, jumping into the completely unrelated field of bitcoin mining. At CES 2018, Kodak launched the Kodak KashMiner, a bitcoin mining rig that you can rent from Kodak for two years for US$3,400 up front, plus 50 percent of any bitcoin you mine.

According to the Kodak KashMiner brochure, titled in all caps: 'IN MATH WE TRUST', customers can expect to receive a payout of about US$375 per month for the next two years if bitcoin averages a value of $14,000 in that time frame. 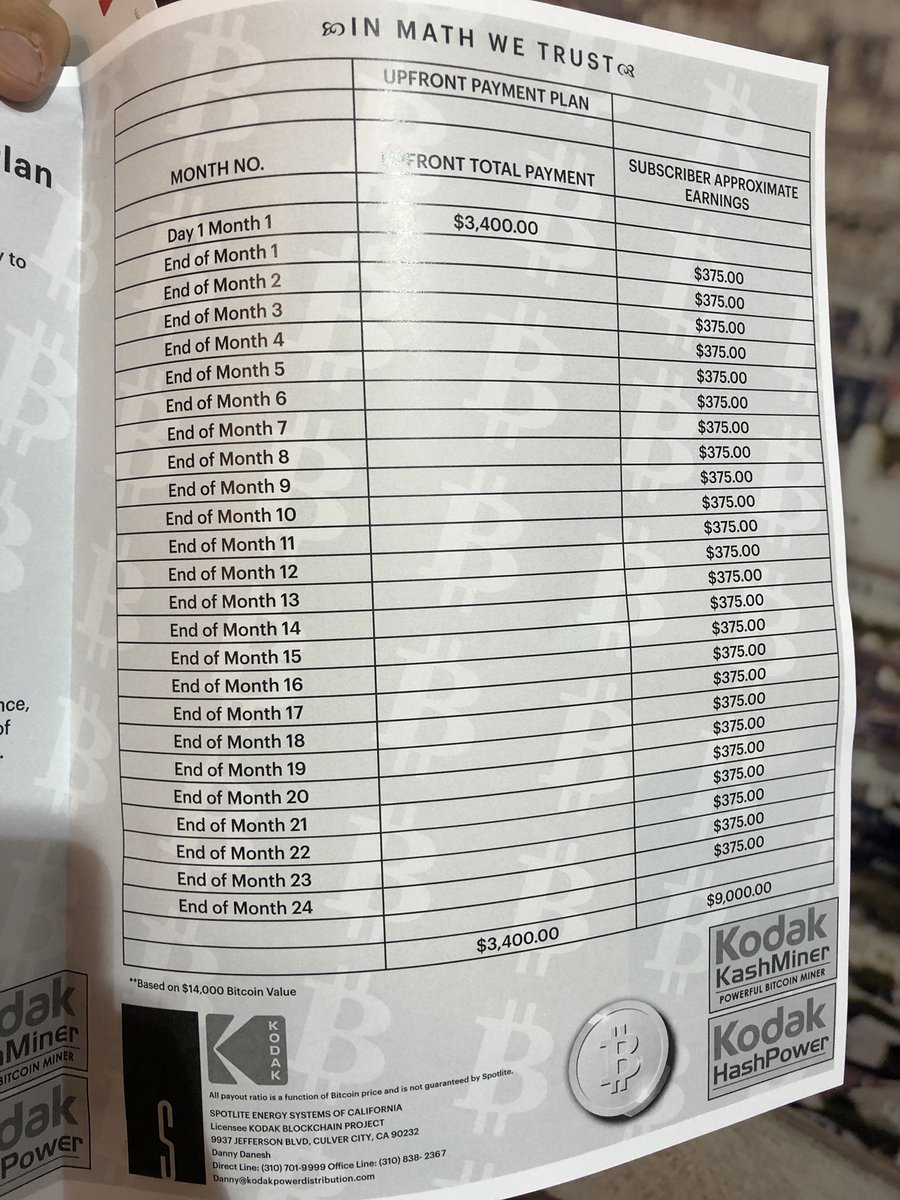 The problem is, Kodak's math completely ignores one of the basic principles of bitcoin: each bitcoin mined makes the next one harder to mine. The difficulty in mining bitcoin is currently increasing at a rate of about 15 percent per month, which means the KashMiner's output will also drop by about 15 percent each month. So, while Kodak’s KashMiner may be able to net you US$375 in its first month, as its output decreases you won't be earning nearly as much. In fact, according to Saifedean Ammous, an economics professor and author of The Bitcoin Standard, to continue earning US$375 per month over two years, bitcoin will need to reach an average value of US$28,000 to offset the expected increase in difficulty.

The worst part about all of this is that Kodak isn’t even alone in its desperate cash grab. Last year, there were an alarming number of companies changing their name to include either bitcoin or blockchain (the core technology that underpins bitcoin), often despite being in completely unrelated fields. The most egregious of these is the Long Island Ice Tea Corp, a beverage company that changed its name to Long Blockchain Corp, despite having nothing to do with any form of cryptocurrency.

Unfortunately, these tactics actually work. Kodak's shares are up 120 percent since announcing the KashMiner last week. And within a week of changing its name, Long Blockchain Corp saw a 458 percent increase in its stock price. In fact, there were twelve companies last year that saw between 309 to 42,500 percent gains thanks to changing their name to include either bitcoin or blockchain.

So what's the lesson to be learned here - other than, if you're starting a new company you should probably call it the 'Bitcoin Blockchain Corp'? As long as consumers and investors keep giving money to any company that jumps on the latest buzzword, there's nothing to stop them from coming back year after year with new schemes. Right now it's 'bitcoin' and 'cryptocurrency' but next year it could be something else. Often, these companies have absolutely nothing to do with whatever fad they're piggybacking on, and are just trying to bamboozle investors. So make sure you know what you're buying or investing in, and don't just assume that because a company is throwing around words like 'bitcoin' or 'blockchain', it actually knows what it's doing.

Note: This opinion piece was first published on 15th January 2017.

Don't be fooled by specs, nobody needs an 18000 DPI gaming mouse.