Care for Your Ears, You Hear

So what exactly do I have in common with Pete Townshend from The Who? Besides the fact that both of us are generation defining, virtuoso guitar players (him maybe more so than me) we both also suffer from tinnitus (again, him probably more so than me). Other famous celebrities such as Chris Martin, Bono, Eric Clapton and even Bill Clinton find themselves in the same boat. What is tinnitus you say?

Tinnitus, pronounced tin-ih-tus or tih-nite-us, has its roots in Latin and the word itself means “ringing”. Defined as a condition rather than a disease, tinnitus is the perception of sound usually experienced as a ringing noise when no audio stimulus actually exists. Tinnitus can be caused by a variety of reason, the most common being exposure to noise or high volume sounds.

Ever experienced a ringing in your ears after an unexpected, extremely loud sound such as heavy machinery being operated right next to you? That phenomenon is described as short term tinnitus and it generally dissipates soon after the audio stimulus has been removed. However if your ears are constantly exposed to high decibel levels, the ringing sensation may stick around for longer stretches of time. 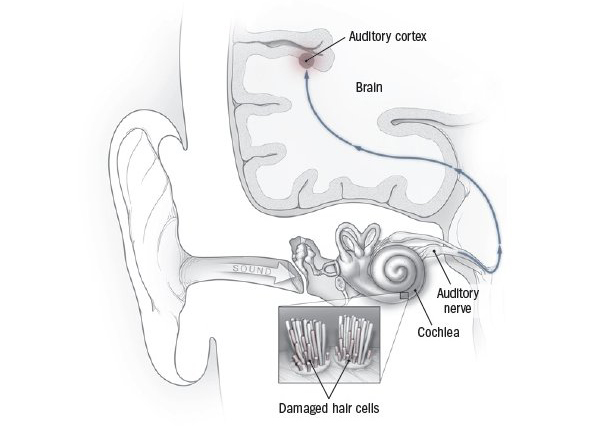 Sound waves are caught by the ear and directed through the ear canal to the middle and inner ear. Inside, specific hair cells which are part of the cochlea help transform the sound waves into electrical signals which are interpreted by the brain as sound. Loud noises however can damage these hair cells resulting in the constant illusion of sound or tinnitus, even when no audio stimulus is present.

It is easy to understand why Pete Townshend, Eric Clapton, Chris Martin or Bono might suffer from tinnitus. Being a big rockstar and performing on stage with the Marshall amplifier stacks cranked up to 11, year after year, can take its toll on your ears. My excuse is much more mundane. I simply practised bad headphone usage for way too long.

As the person tasked with reviewing audio products, I have to test cans as part of my work. But even when I am not evaluating the latest audio product, I can generally be found with a pair headphones perched on my dome simply because I like music and I feel it makes me focus better. On my commute to and from work, I use in-ears as well. Since they have no active noise cancelling features I generally have the volume cranked up all the way to maximum to drown out ambient noise. I would say that for the past year I have been listening to audio at high volumes for roughly five hours a day.

Being somewhat young and having never faced my own mortality, I always dismissed the “Loud volumes can cause damage to your ears” prompts on my playback device. Until a few weeks ago when I distinctly heard a ringing noise in my left ear as I was going to bed at night. The ringing persisted and would always come to the foreground of my attention whenever everything else was quiet. Seeing that I rely on my ears for my livelihood and on the whole cannot envisage a life without music, I wasn’t very pleased with this development.

Chronic tinnitus is no laughing matter. Besides being symptomatic of early stages of hearing loss and ear damage, approximately 10 percent of chronic tinnitus cases interfere with daily life to such a degree that psychotherapy is required (Harvard Medical). You can imagine how a ringing noise in your ears that never stops can drive someone mad.

Advice from medical professionals on how to manage and mitigate tinnitus mirrors common sense. Needless to say I have drastically reduced my usage of headphones at work and at home. I have also started keeping the volume for any audio playback at 40 percent or lower at all times. Moderated usage of audio products and adhering to suitable volume levels when listening to audio is advice that everyone should heed. I may also shell out money for a decent pair of noise cancelling earphones, like the Bose QuietComfort 20, to remove the need for high volume audio to drown out ambient noise on my daily commute. Sure the earphones may cost S$499, but I think my left ear is worth more than that to me.

Good tech has good specs, great tech has personality. Keeping that in mind, Hurrairah expects character and performance from any gadget he spends his hard earned cash on. As a guitar player and 'struggling' musician, he has an appreciation for natural sound is tasked with reviewing speaker systems.